For almost 3 years, Apple’s iPhone has set the standard for mainstream smart phones. Recently, Apple has taken over a large portion of the smart phone market, now manufacturers like Nokia are taking the iPhone threat seriously and bringing out new phones to try to compete. One phone that looks like it has a real chance to compete with the iPhone is Nokia’s new N900 phone/internet tablet. Here are 15 ways we think that the N900 is better than the iPhone, and a few reasons why the iPhone is still better. 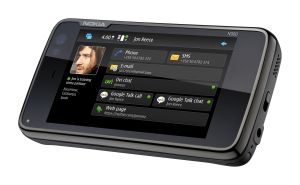 At first glance, it seems that the iPhone is the clear price winner, coming in a full $260 cheaper than the N900. However, because the N900 is an unlocked GSM phone, you’re not stuck with a single mobile provider. The $300 iPhone 3GS is subsidized by AT&T and locked to their network. With the iPhone, you must agree to a 2-year contract which will end up costing you thousands of dollars in the long run.

With the N900, you are free to choose any GSM mobile provider you want (T-Mobile or AT&T in the US). One particularly interesting option by T-Mobile USA is their new “Even More Plus Unlimited Talk + Text + Web” plan. This plan gives you unlimited everything for $80/month - with no annual contract. Compared with the price of an iPhone and a 2-year AT&T unlimited contract ($150/month), you could save $1420 over 2 years! Of course, you could always go for a cheaper plan and save even more money. 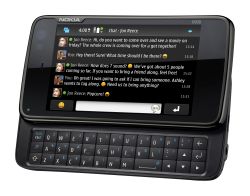 If you have ever traveled abroad with a smartphone, you know that international roaming rates can be unbelievably high. Even if you plan ahead and buy a special international data package for your iPhone from AT&T, it will still cost you $200 for 200 MB of data. With the N900, you can avoid these outrageous charges and simply get a local SIM card for the country you are visiting. This can save you hundreds or even thousands of dollars!

One of the most common complaints about the iPhone on-screen keyboard. It can be incredibly frustrating to type on a little screen with no tactile feedback. The Nokia N900 has a built in keyboard, and while we doubt you'll be able to type 100 words per minute, having a physical keyboard should allow most people to type faster and more efficiently. Of course, if you like on-screen keyboards, the N900 has one of those too.

The Nokia N900 comes with 2 cameras. The first is a 5 megapixel Carl Zeiss autofocus camera with dual LED flash. One design decision we really like is the lens cover, no more cleaning off hand grease and pocket lint before taking photos! Additionally, the N900 comes with a front-facing VGA webcam. This should be very useful for things like video calls and video blogging.

The N900 has Skype, Google Talk, and SIP support built right into the phone's dialer. This means that you can make Skype calls just as easily as regular mobile phone calls. There's no need to install additional software or launch a separate app for Skype. The N900's built in webcam for Skype could make hauling a laptop around for video calls a thing of the past.

The N900 comes with GPS routing at no extra charge. No need to buy or download extra software. Maps and routing are provided by Nokia's Ovi service.

7. Browser with Flash Support and Add-ons

Apple claims that with the iPhone you get the full internet. However, the iPhone still does not support Flash, a technology found on many websites and used extensively for embedded video. The Nokia N900 supports Flash files embedded in pages - Youtube, Flash games and other sites work just as they would on a desktop computer. Also, since the browser on the N900 is based on Firefox, it can be extended with add-ons. Add-ons such as Adblock Plus are already available for the N900. 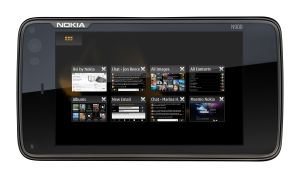 Another big complaint against the iPhone is that you can only run one app at a time. For example, you can't listen to music via the last.fm app and use another app at the same time. This is not a problem with the N900, you can run as many apps as you want simultaneously - just like on your desktop!

With the iPhone, you only have 16 or 32 GB of memory, period. The Nokia N900 features a microSD memory card slot that allows you to extend the memory with cards. If you run out of memory for all your photos, videos and music, you can simply add or swap memory cards - you are not limited to only 32 GB.

Not only is the N900 unlocked for use on any mobile GSM provider, it's also a freedom loving phone. The core Linux OS and most of the Maemo platform is open source and Nokia does not stop you from having root access to your phone - no jailbreaking needed! You are also free to download and install any applications you wish, you don't need to ask Nokia for permission. With the iPhone, if Apple doesn't like an app, you're simply out of luck!

The Nokia N900 includes a built in FM transmitter that you can use to listen to your music in your car. To get this feature on an iPhone, you'll need to buy an add-on device. The N900 also includes an FM Radio so you can listen to the radio right on your phone. These are both very nice touches, extras, that Nokia has added to the N900.

The iPhone is a pretty great device, but it's not all that great for real geeks. Real geeks need things like a terminal application, root access to the phone, ssh, vnc and bit torrent built into their phones. There's nothing more geeky than using a terminal on your phone. Maybe you'd like to write some bash scripts to automate things? The possibilities for showing off your geek cred are endless!

Let's be honest, the iPhone is old news - everyone has one these days. Of course, most people just have one to show the rest of the world how cool they are. But you don't want to be like everyone else, do you? Getting a phone like the N900 will make you stick out in a crowd of iPhones. Why not be different? ;)

Why the iPhone is Better 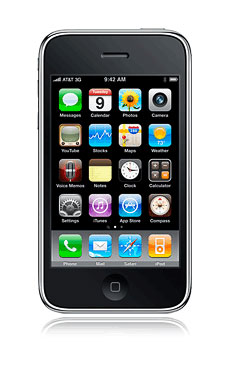 Apple recently announced that their app store has over 100,000 apps (even though many are frivolous or repetitive). The N900 currently only has a few hundred apps available. This is one place where the iPhone really shines.

Although the N900 comes with an impressive looking 3D game called Bounce Evolution, we highly doubt that many developers will be making games for the N900. Apple has really made a push for the iPhone to be a gaming platform and there are many great games available. If you want to play games on your phone, the iPhone is the clear choice.

Even though we poked fun at the iPhone for being too mainstream, it is true that the iPhone is extremely popular. This means that it has more apps available, and it's probably easier to find someone in the office who can help you with it. If you want to buy this year's most popular smart phone, the iPhone is for you.

One of the iPhone's biggest claims to fame is its multi-touch interface. Apple took the old idea of multi-touch and really made it shine on the iPhone. The N900 does not have multi-touch capabilities. While I doubt most people would miss this functionality, if you want to do lots of "pinching" on your phone, the iPhone is the winner.

Because the iPhone lacks a built in keyboard, it weighs slightly less than the N900 and is slightly smaller. Size is a big deal with mobile phones. A few millimeters can make a huge difference when trying to fit a phone in your shirt pocket. In the size department, the iPhone is the clear winner.

Overall, we think the Nokia N900 is a better phone and internet device than the iPhone. If Nokia plays its cards right, it could have a real hit on its hands. But will the N900 overtake the iPhone in popularity? Probably not, but at least it will give a lot of geeks a great iPhone alternative.